Village of the Damned

Village of the Damned is the first horror film festival to be held in Auchmithie north of Arbroath. Its taking place this coming weekend and involves horror films being screened over the three nights of Halloween. As well as the films there will be an exhibition taking place which will be open during the day (12pm - 5pm) from Friday 29th - Sunday 31st October. The exhibition is free but for tickets for the film screenings you can buy them here. The event has been organised by Helen Macdonald from Jolly Good a jewellery and accessory designer with a love of all things horror and Ross Bull from Agitator Studios who is a filmmaker and photographer.

I have six oil paintings which will be part of the exhibition with a creepy theme. I'll make sure I pop along to have a look at all the work exhibited but I'll be giving film screenings a miss as I'm a wimp when it comes to horror movies and hardly ever watch movies for over 18s- I'd much rather a thriller, rom com or a cartoon I'm afraid. 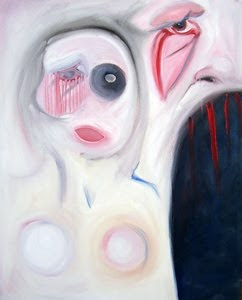 Yvonne Stewart
My work is a mixture of textile art with illustration. Materials I like to work with include gouache, thread, ink and pencil.